Fredericks, a new pop-up wine bar in the heart of West End, is a contemporary homage to Frederick Peters, the founder of the eponymous ice cream factory which is adjacent to the bar. This West Village concept celebrates the history of the site, with film designers Jon Dowding and Chrissy Feld engaged to bring the concept to life, which will be operated by Brisbane hospitality professionals.

Fredericks is the latest project from Paul McGivern and Bailee Dewes of The Wolfe, La Lune, and Corella in collaboration with Daniel and Amelia Miletic of Kangaroo Point’s One Fish Two Fish. With an open-plan and mostly alfresco space, Fredericks will have a similar focus on wine as McGivern’s existing venues, with a crafted cocktail and beer offering also available. Simple bites like cheese and charcuterie will be on offer to while away a summer afternoon, while guests can also enjoy food from West Village’s The Garden Pantry, which houses Salt Meats Cheese, Cheeky Poké, and Mr. Bunz, with a drink at Fredericks.

From its prime position at the top of Factory Lane which leads directly off Boundary Street, Fredericks’ guests will be treated to views of the Peters Ice Cream factory building, which received extensive media coverage when it was built in 1928 due to Frederick Peters’ innovations in the use of salt, ice, and cutting-edge refrigeration. Fredericks’ lively design with the elements of colour and lights draws inspiration from the joy of the entire ice cream experience, including the packaging, various flavors, and shapes popularised by Peters Ice Cream.

While it’s just a taste of the lively laneway tenants to come to West Village in the coming years, Fredericks is a fresh-faced pop-up that’s set to have visitors exploring the lanes, wine glass (and perhaps ice cream) in hand. 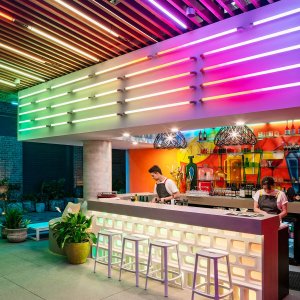 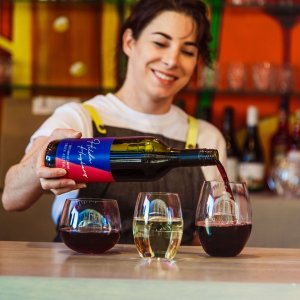 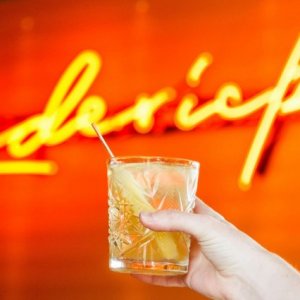