Being one of the first suburbs in Brisbane to be occupied by white settlers, it is marked as being one of the earliest points of racial conflict in the city.

The six recently installed history panels have been well received with interest and enthusiasm by the local community. Important themes dealt with are the continuous history and presence of indigenous people, the story of Boundary Street, working class history, multiculturalism, Greek Australians and the role of artists and activists. The Boundary Street Panels installation evokes West End’s history of opportunity, inequality and diversity. Featuring a striking greyscale colour palette, the content is presented in an accessible and engaging manner. Photographs of the Kurilpa Peninsula’s past could get the viewer lost in them for hours, as the blocks of text beneath offer some context for a topic which necessitates such storytelling.

Steve Capelin, a writer and local historian living in West End, is one of the four core members of the West End Making History Group. “The panels are intended to help maintain a sense of local identity and to remind us of the importance of knowing our own history,” he said. “West End is one of the earliest areas of Brisbane occupied by white settlers. It has a history of colonial conflict from its beginnings and subsequently became home to an eclectic mix of ethnicities, classes, workers, activists etcetera,” he said. “The Aboriginal community have remained a constant presence in this community and the area has become a more inclusive and tolerant place to live.” The group regarded the Indigenous context as being at the forefront of the historical content of the installation. “The Aboriginal component was critical. Any history of any area in Australia must take the Indigenous story as its starting point. The challenge for us was to present an historically accurate portrayal of early colonial conflict and to link that to more recent history. The issues between Indigenous and white Australia have not been resolved,” he said.

So, what is next for the Making History Group? Capelin is not too concerned after such a demanding few years. “It’s been an exhausting project, rich both in learning and discovery and challenging for us all,” he said. “There are so many stories in any community but in West End and South Brisbane in particular, there’s a lifetime of possibilities. We’ll just kick back and wait for inspiration I expect.”

Documenting such a difficult historical story is no mean feat. The Making History Group has taken on, and successfully carried out, an incredibly sensitive project and presented it as a clear and interesting display to the people of Brisbane. In a time when the legacy of racism and dispossession is nowhere near settled, an installation such as the Boundary Street Panels is sure to educate and inform residents of the 4101 area, on a street which serves both as the centre of the community and a reminder of past conflict and injustice. 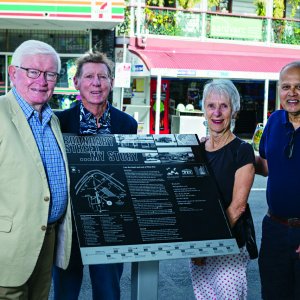 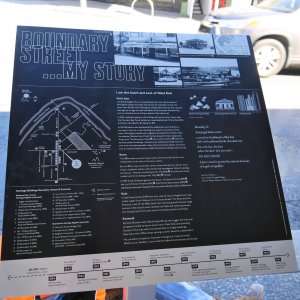 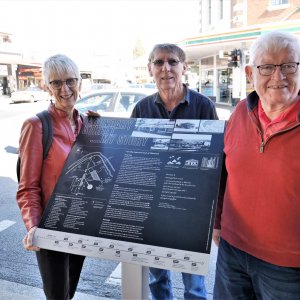 Written by Tom Fleming
Images via Mark Crocker and Jan Bowman, The Westender

← BOOK: Home Where You Make It
Mater Gift →