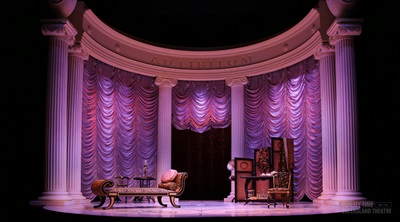 If you are missing theatre, live theatre, then Queensland Theatre has free, yes free, plays for you.

Every third Tuesday, Play Club has play readings at 7.30pm. Sounds impossible? Well, their ingenious solution is to assemble director and actors who read through a play. On Zoom. So, in the privacy of your home (or where ever I guess), you can settle in your jammies, grab a glass of something, a bowl of popcorn and be part of an international audience to enjoy some of the best live theatre you will ever see for free.

Here’s how it works.  First, register your interest at QT Download Zoom – follow their thorough directions if you’re not Zoom savvy. And you will receive an email acknowledging your interest and a follow up reminder a couple of hours before the play starts. Then settle down for the next two or so hours and watch a play.

Last offering Lee Lewis hosted Suzie Miller’s Sunset Strip. Lee introduced the play and handed over to director Daniel Evans;  Daniel gives a brief background and then introduces the actors Caleb Alloway, Kerith Atkinson, John McNeil, and Naomi Rukavina.  Each actor sits in front their computer screen and reads/acts the play.  Afterwards all stay for a Q&A. The audience can post comments, ask questions and digitally interact with cast and crew.  As someone commented, it was television meets theatre and internet.

The actors were fabulous and the play moving.  If it sounds weird, it wasn’t. Especially fun was, as a viewer, the ability to partake while comfy at home – where toilet and top-ups were possible without disturbing other audience members. Particularly insightful was the post-play interaction.  During this time issues and the nuts and bolts of a digital play were fascinating.  First, choosing the play.  Clearly kissing or embracing a screen would be just plain weird, period costuming is out of the question (the actors wore black for Sunset Strip) and, because of the slight digital lapse, overlapping dialogue is impossible. Fascinating hey?

Lee explained that three plays were originally planned and started in April. The plays were so popular that a sponsor stepped up and so the season runs until 31 December this year.  The plays are Australian – which is always a great showcase. You can be sure, I’ll be ready for the next one … I mean where can you watch some of Australia’s best talent, in comfort with toilet breaks.  It’s genius. And entertaining.