The mural was created and installed by Tori-Jay Mordey, an established Torres Strait Islander illustrator and artist based in Brisbane, and Warraba Weatheral, an installation and street artist from the Kamilaroi Nation of South-West Queensland. The property’s developer SCA Property Group commissioned Blaklash Creative, a local 100 percent Aboriginal-owned creative agency to curate the bespoke mural using local artists.

“We wanted to create a destination for shoppers and diners in West End and celebrate the rich connections that Aboriginal people have with the area which is reflected in this beautiful mural from two very talented artists,” SCA Senior Development Manager Aleisha O’Connor said. Blaklash’s Co-Director Troy Casey, himself a proud Aboriginal man from Kamilaroi Country said they looked carefully at stories that could connect pre-contact and contemporary West End culture.

“West End is a historically significant place for Aboriginal people and continues to maintain a strong community feel. Drawing from this narrative the artists made connections with the history of the area through native plant species which were used as food and medicine. This narrative is intertwined with the more recent history connected to the Tristram’s Soda Factory including the use of the bottlebrush flower which was used as a sweetener for flavouring drinks. These elements have been beautifully included in this colourful mural which helps describe the history and characteristics of the area.”

The official opening of The Soda Factory will be held in November 2021. The refurbishment will include a new internal mall area, new travelators and lift, upgraded amenities, activated street frontage and redeveloped car park. 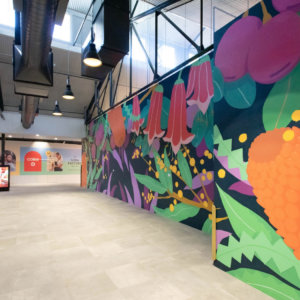 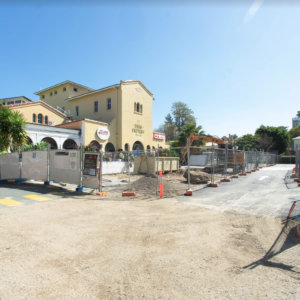 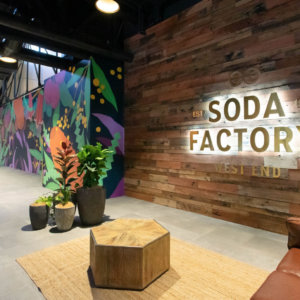