West End local and Hilton Brisbane’s Vintaged Bar + Grill Chef de Partie Stefan Preuss faced some of Australasia’s best culinary talent at the Hilton Australasia Food & Beverage Masters in January. After being named a Culinary Cup finalist late last year, the talented chef battled it out among Hilton’s best and brightest, placing third out of the nine competing. “I was extremely happy and proud to take on the challenge to represent our Hotel in the best way possible,” said Mr Preuss.

Launched in 2011, the Food & Beverage Masters concept started in Europe and expanded to the Middle East and Africa in 2012. By 2015, the Masters launched in the Asia-Pacific region. The annual competition sees exceptional Hilton talent compete across Bar, Barista and Culinary disciplines. Winning the hotly contested spot as Hilton Brisbane finalist late last year, Preuss was competing in the footsteps of his predecessor and 2019 Culinary Cup winner Charlie Song. Refining his skills over eight years in the industry, four of which have been spent across at Hilton Hotels, Preuss was ready for the challenge. This year, Brisbane Hilton hosted finalists from Australia, New Zealand and Fiji, delivering food and beverage masterpieces which were judged by a panel of experts within Hilton and beyond.

Internationally renowned chefs including Executive Chefs David Vandenabeele, Sam Moore and Philip Nock were members of the panel. “It’s my first time competing and I’m excited to be involved,” said Preuss. As his typical working environment is behind the kitchen doors of Vintaged Bar + Grill, Preuss said he was a little nervous to be competing in front of an audience — let alone an international judging panel. However, also in the audience was his supportive friends and family. “I want to thank my beautiful partner for always having my back and making this possible,” said Preuss. Nerves aside, the Chef de Partie cooked his way through a selection of challenges, evidently wowing judges with his technique. “I really tried to get faster in my basic techniques over the past few months, practising to make them bulletproof,” he said.

During a mystery box style challenge, competitors were given swordfish as their hero (previously unseen) ingredient. With German cuisines one of his specialties, Preuss chose to create a dazzling dish of swordfish and spinach German spätzle, with confit tomatoes and basil chips. Spaetzle is traditional German dish made from flour, eggs and milk, and often referred to as German pasta. Preuss said he loved working with the high quality produce provided at the competition, with the swordfish caught fresh from Mooloolaba. Preuss identifies himself as a paddock to plate type of cook and enjoyed showcasing local and seasonal produce throughout the competition. “The biggest plan of mine is to start my own sustainable permaculture farm with my beautiful family,” he said. Hilton Brisbane team member Sophie Dewhurst took away the Barista Cup. 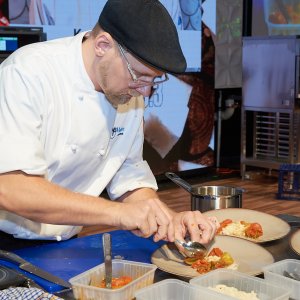 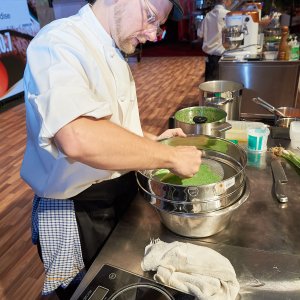 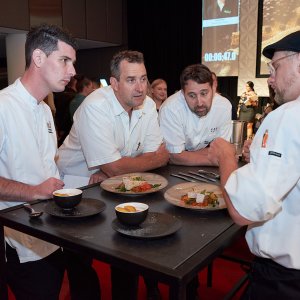