Half the penthouse apartments at Brisbane 1 have now sold. Only four of the eight penthouses in the $500 million landmark Brisbane 1 development in South Brisbane are still available. Brisbane 1, comprising three separate towers of up to 33 storeys, occupies an entire block bordered by Cordelia, Peel and Boundary Streets, offering stunning panoramas.

The project by R&F Property Australia is one of the largest in a series of new residential developments that are transforming Brisbane’s fast-growing inner south into a thriving lifestyle destination. R&F Property Australia Vice President Thomas Chiu said he was thrilled with the outstanding buyer interest in Brisbane 1.“While the views afforded by all apartments in Brisbane 1 are spectacular, they are truly breathtaking from the upper levels,’’ Mr Chiu said. “This has really struck a chord with buyers, along with Brisbane 1’s exclusive amenities and location in the heart of the exciting South Brisbane precinct.’’

Around 85 per cent of Brisbane 1 apartments have now been sold with Paul and Marion Higgins among the buyers to secure sky-high views from a 30-storey sub-penthouse. The couple enjoy a sweeping outlook stretching across the east and taking in Suncorp Stadium and South Bank, which they say is even more impressive at night. In addition, they are thrilled to be discovering all the benefits and conveniences of living in South Brisbane, including its easy access to the CBD. “For the past 10 years we had been living in an apartment on Coronation Drive at Milton. While we found Milton convenient, we believe that South Brisbane is even better,’’ Mrs Higgins said. “And the view from here is just spectacular.’’

Designed by Brisbane-based architects Bureau Proberts, each tower at Brisbane 1 has access to an expansive recreation deck on level six, featuring a 25-metre lagoon pool, barbecues and alfresco dining areas. Residents will also enjoy a host of other exclusive amenities, including two spas, lush rooftop terraces, three plunge pools, a gymnasium, theatre, children’s playroom and other entertainment spaces. Brisbane 1 provides a wide range of one, two and three bedroom apartments, and features an expansive lobby with warm timber and stone textures and floor-to-ceiling glass, setting the tone for the stunning glass façade that is a hallmark of the towers. 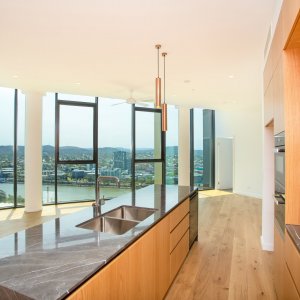 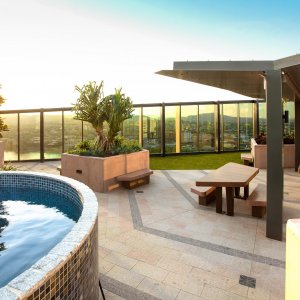 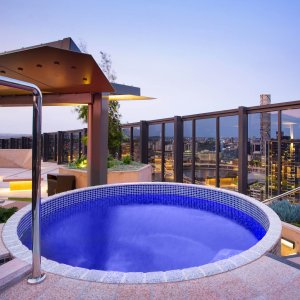 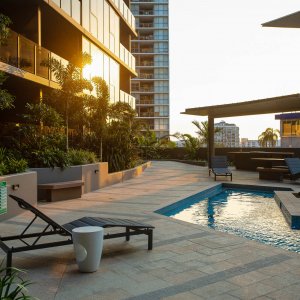 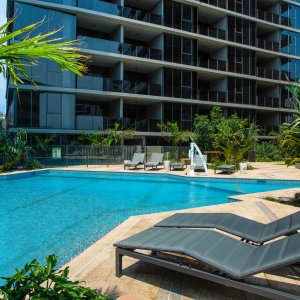 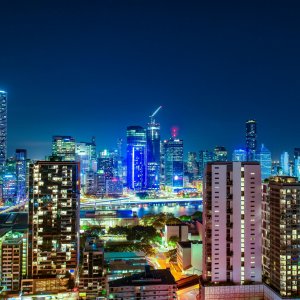