Published on January 17, 2018 | in Community
The West End and West Village communities will soon be able to enjoy a new green oasis and water play area on Boundary Street, following the lodge of a development application with Brisbane City Council.

Sekisui House, developer of the West Village project, has lodged the application to commence work on the project’s first major public open spaces, including a 1500 square metre public park.

“These parkland and community spaces will create a point of difference for West Village by providing open green spaces in the inner-city for residents to enjoy,” said Mr Thompson.

He also said The Common would reinstate the historic forecourt of the 1920s Peters Ice Cream Factory.

“We are about to breathe new life into West End’s Ice Cream Factory as a residential and retail precinct, and The Common will be a cool, green entry statement that embraces the heritage listed building,” Mr Thompson said.

“[It] will offer a cool oasis and will include lush, colourful and sculptural plants as a contrast to the urban surrounds.

“Grassed areas will provide a setting for viewing performances, picnics and small gatherings, and tall trees with a diverse canopy will provide a cool sanctuary full of colour and texture.”

The Common will also feature a water play area adjacent to Boundary Street, including popwater jets to “add moving water, sound and additional interest to the landscape”.

“Both laneways will include deep plantings, landscaped market gardens and innovative lighting,” he said. 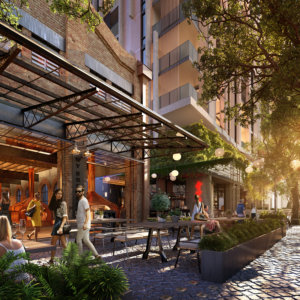 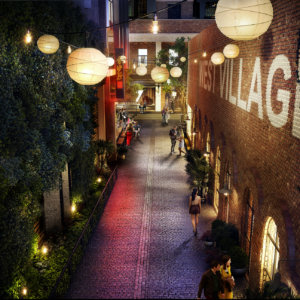 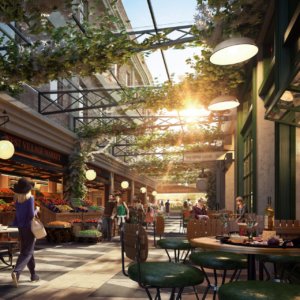