Monica and Shivesh Morgan were high school sweethearts, but they did not exactly have a perfect beginning to their relationship. When they met in eighth grade, Shivesh was enamoured instantly while Monica hardly noticed him. She initially thought he was two different people, such was the distance between his enthusiasm for computer sciences and distaste for English class. In ninth grade, Shivesh offered to tutor Monica in science and as she discovered how much they had in common, the romance bloomed. “We were each other’s first and only boyfriend/girlfriend,” Monica said.

Throughout their relationship, Shivesh had a habit of giving Monica odd small items, declaring them priceless tokens of his love which she ought to keep forever. In 2018, this resulted in a moment of great confusion for Monica when during dinner at Pony Dining, with a stunning view of the Story Bridge and Brisbane River, Shivesh got down on one knee, reaffirmed his love, declared he wanted to spend the rest of their lives together and then proceeded to propose with a softdrink can tab while Let’s Get Married (Jagged Edge) played from his phone. It was an immediate “yes” from Monica, but not because of the softdrink tab. Shivesh then pulled out the real ring from his pocket, a princess cut diamond with a halo and diamond band. “It was exactly what I wanted, somehow he knew!” Monica recalled.

The couple planned the wedding themselves, and the process was far from smooth. Monica’s organisational efforts were thwarted by double booked vendors cancelling on them, her wedding dress arriving in the wrong colour, and then tripping down the stairs and breaking her tailbone. The couple also had a lot of help from Athena at Celebrating In Style. Athena was especially understanding and “helped us organise the ceremony decorations the week of the wedding after our other vendor suddenly cancelled on us.”

Seeing as Shivesh is Indian and Monica is of Chinese descent, the couple decided to have a multicultural wedding with three ceremonies: Chinese, Indian and ‘White Dress’ all on the same day. The traditional Chinese tea ceremony was held at Monica’s parents’ home, while the other two ceremonies and the reception were held at The Greek Club.

The choice of venue was both sentimental and practical since The Greek Club was where Monica and Shivesh had their first dance at their high school formal. It also became the place they had their first dance as a married couple. The Greek Club was also large enough to host all 150 guests. The theme for their special day was Elegance which was accompanied by a burgundy and navy blue colour scheme for the bridal party, and white and gold for the ceremony and reception decor. White flower arrangements with floating candles by Captivating Moments and Celebrating in Style decorated the space. For Monica the day was spectacular and moved very quickly; they would not have changed any of it. Immediately afterward the pair took a short 10-day honeymoon in Thailand but are looking forward to a longer getaway in Europe next year. 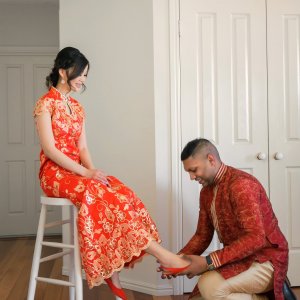 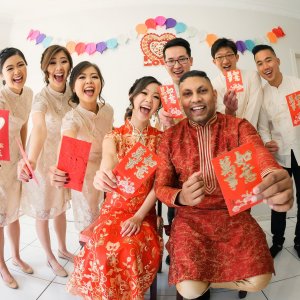 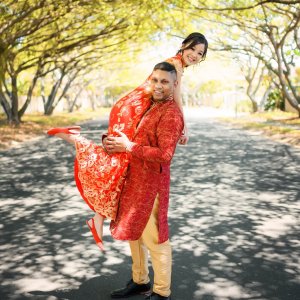 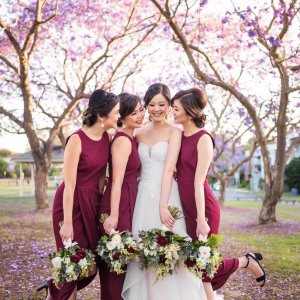 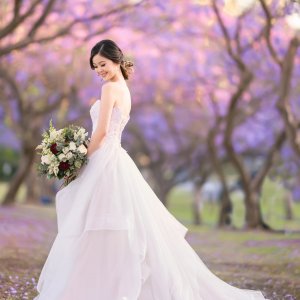 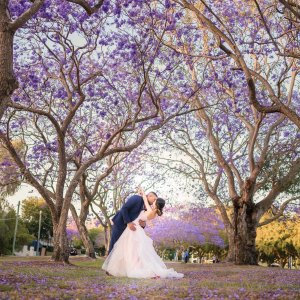 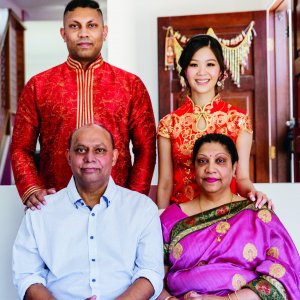 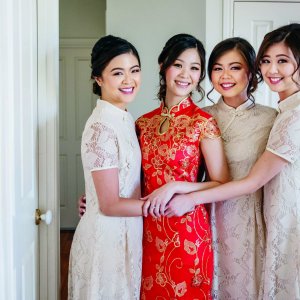 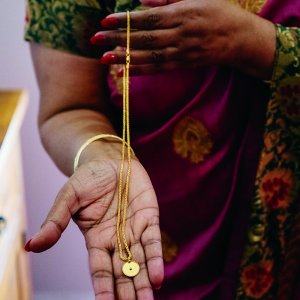